We, the undersigned, heartily petition all leaders and members of human society to implement the Sublime Vision as the new human life paradigm. The Sublime Vision provides what is urgently required for a rapid transition to a regenerative Earth stewardship: a sublime transition in human consciousness uniting humanity in the higher purpose of Inner Growth.

“We need a Sublime World nourishing Inner Growth because we are sublime beings beyond the biological body.”

Ecolibrium: Ecolibrium means equilibrium with our ecosphere in all fields of life through regenerative life systems that are sustainable, self-repairing and nourishing Inner Growth. The logo shows a balance and the sun giving energy to fresh leaves.

The need of the hour is to reverse ecocide by achieving the Ecolibrium – the equilibrium with our ecosphere. 966 jurisdictions covering 212 million citizens in 18 countries have declared a climate emergency. We are in the midst of global eco collapse due to skyrocketing species extinction rates (175 are going extinct every day, 95% due to humans! 15% of all total species are lost every 10 years!), ecosystem loss (82% of wild animals by mass and 50% of live corals are already lost) and climate change. Eco collapse gives evidence that infinite growth in a finite world is self-destructive. Yet nobody wants to stop growing. Growth is integral to life. So what’s the solution?

We facilitate the transition to regenerative post-growth societies by redirecting the impetus of infinite growth to Inner Growth, which is truly infinite, harmless and giving lasting satisfaction. Many experts across various disciplines agree that if we want to avoid human extinction, infinite growth-driven economies must be replaced with a regenerative paradigm – but they haven’t found it yet. The Sublime Vision offers this new paradigm for a regenerative, Sublime World. 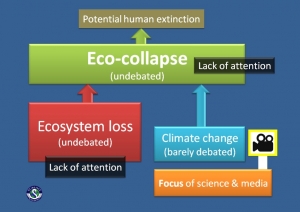 There are two main climate scenarios that scientists either choose to agree on – (1) the “little chance scenario” and (2) the “overshoot scenario”*.

[*Note: There is no third scenario in which the climate will stabilize again by itself. Climate change deniers spread pseudo-science funded by big industry with an almost $1 billion/year budget, although their myths have long been debunked. Unlike public opinion, the scientific consensus on man-made global warming is 99.99%, as pointed out by this paper.]

For both the scenarios, the actions are the same: Massive global climate actions and united prayer to attract divine intervention (which is also crucial in the very little chance scenario of limiting heating to 1.5°C). The urgently needed drastic carbon budget reductions require great sacrifices on many levels. Many experts have pointed out that such sacrifices require something we lack so far: a massive shift in consciousness. The Sublime Vision now fills this gap by providing a paradigm shift in consciousness and core identity.

Another important point of consideration is that our lack of willpower to timely implement the many available green solutions indicates that the problem lies much deeper. External pollution is caused by internal pollution of our consciousness, as depicted in below artwork.

Simply by making the world sustainable we haven’t healed our internal pollution yet, and it will again create external peril. Our external problems are symptoms of our inner root crisis. Thus we can only solve them by healing the inner root crisis. This becomes evident when we consider that although all solutions to our eco crisis are available, we refuse to implement them timely, just like a depressed patient who refuses to take medicine, hoping for a deeper change. Global human ecocide is the expression of a depressed human collective whose heart is crying:

“I don’t want to sustain a depressing world that ignores our root crisis and neglects Inner Growth. Give me a Sublime World – then I shall happily sustain it!”

Millions of gadgets cannot make us happy, but a few sublime relationships can. No money can buy us character, empathy, compassion and love. Such priceless inner values require Inner Growth, which is lacking in our present systems of education. People invest everything into external growth because they believe in the Gross Vision that we are the biological body and that our fulfillment can thus be found in the external world.

However, evidence on our website from various academic disciplines shows that the Gross Vision is false. Once we understand that we are sublime beings beyond the biological body, it becomes clear that our root crisis is caused by the Gross Vision and that our collective depression and ecocide are only its symptoms. Our eco crisis really is an ego crisis. The Sublime Vision is the curing life vision that induces the required systemic change or paradigm shift from identifying with matter and exploitation to identifying with consciousness and Inner Growth. It’s the long awaited “software update” for humanity to be able to transition to a Sublime World. Albert Einstein said: “We can’t solve problems by using the same kind of thinking we used when we created them.”

As expressed by Prof. Gus Speth, U.S. Advisor on climate change: “I used to think that top global environmental problems were biodiversity loss, ecosystem collapse and climate change… but I was wrong. The top environmental problems are selfishness, greed, and apathy, and to deal with these we need a spiritual and cultural transformation. And we scientists don’t know how to do that.” A crucial necessity of our time is thus to find a profound transformation that reaches beyond ecology into culture, philosophy and spirituality. However, due to different belief systems, it is hard to find spiritual values that most people will agree upon. With the Sublime Vision self-concept we have identified the basic common value of all spiritual traditions that not only fosters eco-friendliness, but also curbs consumerism and is supported with evidence from various academic disciplines.

In both strategies, a very strong consciousness is vital. It takes enormous amounts of energy not to fall into globally increasing climate depression or pre-traumatic stress disorder when faced with imminent eco collapse. This loss of the capacity to properly deal with the threat also includes apathy, depression, hoarding and looting. With weak consciousness, we will naturally ask ourselves: “Why should we even try to counteract collapse with so little chance?” Here, the Sublime Vision becomes a crucial mental support. By assuring that we exist as sublime beings beyond the biological body, we gain strong confidence to continue our efforts of transforming both our inner as well as our outer world.

The Gross Vision of identifying with a mortal body leads to a consumerist use-and-throw culture because the belief to become extinct when one’s biological body dies undermines the continuity of accountability and social responsibility. The Sublime Vision, on the other hand, inspires us to continue our transformation efforts ‘till our last breath because we realize that our personal life and responsibility continues after death and no effort with good intention is lost. The beauty of the butterfly is determined by the successful transformation of the caterpillar.

In the worst case we face human extinction in the present dimension and migrate to another dimension where we continue living in new forms. All the lessons we learn here will be carried forward there. With this vision, there is a greatly reduced chance of depression even in the worst case. Some say that such hope leads to inaction. But this is not the case here. Rather, the Sublime Vision fortifies our transformation efforts because the quality of the next dimension depends on our present efforts. In the best case we avoid complete collapse through mitigation, adaptation and divine intervention, and then all our efforts will bear fruits in this world. So in any case, the Sublime Vision minimizes depression and maximizes transition efforts.

Although eco collapse and societal collapse are strong negative incentives to transition to a Earth-friendly and zero carbon world, most people still hesitate because they can’t integrate the green transition positively into their lifestyle. We urgently need a positive lifestyle narrative for transition. This gap is also filled with the Sublime Vision. For example, with the Gross Vision, it is considered hip and socially appealing to spend tons of money on luxury holidays, thus bolstering the local economy and one’s own status quo. In today’s time of ecocide, however, it becomes clear that living luxuriously is an eco crime due to being a prime contributor to ecocide. Luxurious ways of travel, accommodation, fashion, jewelry, cuisine, etc. are topping the eco crime charts. But this negative incentive alone won’t do.

The Sublime Vision now grants us a game-changing positive narrative: the less energy we spend on working for external luxury, the more energy we have for the real luxury of Inner Growth. The less we are violent to Mother Nature and feed our false ego of toxic fanciness, the more we can nourish non-violence, humility and simplicity, which are beautiful gems of Inner Growth. For example, instead of buying the latest gadget, which would set off a chain reaction of eco crimes and social crimes, we are happy with what we already have or buy second hand items, because acting sublime is no more an austerity – it is part of our sublime lifestyle building our new Sublime World, in which sublime values like community building, compassion and empathy come first.

The Sublime Vision fosters a transition from artificial necessities and exploitation to inner fulfillment and symbiotic collaboration. It redirects as much energy as possible to Inner Growth and makes sure that material development maintains the Ecolibrium.

We have only been sophisticating our hardware – it’s high time to update our operating system.

A mature person is someone who has stopped growing at both ends and is now growing in the middle.

Human maturity begins now, with the Sublime Vision. We are excited.