Agriculture was the deciding factor that enabled modern human civilization with its fixed settlements, and it is also the deciding factor in reversing eco collapse. Although industry leads global greenhouse gas emissions, agriculture has the biggest potential of making a rapid green transition. 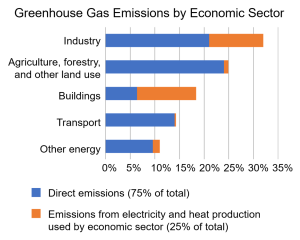 This is because in agriculture, with relatively small changes, its eco footprint can be massively reduced. This doesn’t mean they are free from challenges but they are easier and faster to achieve than transitioning the industry. That’s why focussing on agriculture is so important. Also, the degradation of our food due to nutrition loss caused by soil erosion, soil quality loss, processing, long shipping, conservation and storing and also added chemical fertilizers and pesticide decreases the quality of our thinking, which is very much needed to face the challenge of making a quick green transition.

The assumption that large-scale industrialized agriculture is the only way to feed a growing world population has turned out to be wrong. Rather, world hunger is best cured by small-scale agriculture. One of the leading cause of eco collapse is deforestation lead by the cattle feed industry (mostly soy) and palm oil industry (mostly for food and cosmetics). Upwards of 50,000 acres of forests are cleared by farmers and loggers per day worldwide, and the equivalent of over 10,000 football fields are destroyed each day in the Amazon Basin alone.

Compared to making large changes e. g. in the cement industry, with relatively easy steps like switching to a vegan/vegetarian/low-meat diet (which is also much more healthy) and replacing palm oil with other oils (which are also more healthy), we can achieve a landslide transformation in our efforts to fight eco collapse.

The extreme impact such a change can have is evident from the numbers. If all their citizens simply ate beans instead of beef, the U.S. could almost meet greenhouse-gas emission goals (read article here). The crops fed to industrially reared animals worldwide could feed an extra four billion people on the planet (read article here). A staggering 60% of global biodiversity loss is down to the food we eat. We know a lot of people are aware that a meat-based diet has an impact on water and land, as well as causing greenhouse gas emissions, but few know the biggest issue of all comes from the crop-based feed the animals eat (read article here).

However, proper grazing and dunging by cattle is vital for replenishing the more and more eroding soil with nutrients. Thus, instead of abandoning them, we must revert back to harmonious ways of cattle farming that don’t cost us our forests but instead help to build back healthy soil, which in turn replenishes the depleting ground water and produces healthy food.

Use of pesticides can be avoided or reduced by intercropping and giving shelter to natural pest control animals like birds by plantig trees and bushes, etc. The better way to go than chemical fertilizers that further deplete the soil health is to use natural fertilizers like cattle dung, compost, mulch and biochar, most of which are also great ways to sequester large amounts of carbon.

If agriculture is combined with rewilding (the most potential solution to tackle eco collapse and climate change) in a smart way of interlaying wilderness and agriculture, there will be a great win-win situation because not only will increasing wilderness slow down climate breakdown, but also replenish ground water and increase biodiversity which includes natural pest control like birds.